This restaurant had the best atmosphere.

That’s right folks, it’s another restaurant review. A really brief one. I have to be honest: when I set this whole blog system up, challenged myself to actually use it, and refused to follow convention by defining an actual topic, I figured that when food was featured, it’d be mostly food made by me. Not because I’m particularly good at it, but because a) I like to do it, and b) I really like to take pictures of everything I eat.

But truly, I figured I’d be taking photos of food I made because it combines three of my favorite things (photos + food + cooking. This is not a complicated post.) Either way, turns out I’m doing more restaurant reviews than cooking, partly because I love eating out, partly because I’m a cheap graduate student and most of my “homemade” meals consist of eggs on pasta, and mostly because my kitchen isn’t as user-friendly as I’d imagined during the aforementioned dream-reality of establishing a blog that featured food.

So, c’est la vie. Today’s review presents The Best Fish and Chips I’ve Had So Far. Fair, I haven’t tried an unbelievable amount. It’s one of those dishes that you have to have, but once you order it and plow about 1/4 of the way through, you realize that everything tastes the same. What is it about making peas mushy that zaps the flavor right out of them? Suddenly, the only difference between peas and chips are the texture, and let’s not even start comparing battered fish to deep-fried chips. But, I keep trying. (Remember, I have that weakness for fried food. I can’t believe I’m putting that out there on the Permanent Internet, but I’m having broccoli for dinner tonight, I promise.)

This place, though, was amazing. Founders Arms sits just outside the Tate Modern, on the banks of the River Thames. (How poetic is that? Seriously, check out the photo they have on their website.) The view is just gorgeous, overlooking the romantic Millennium Bridge, with the entire skyline of London laid out for you like Dinner and a Show. Plus, after an exhausting afternoon at the Tate Modern, why would you want to stumble any farther than a few hundred yards (meters?) for something with a kick to numb your feet? 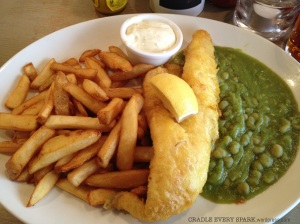 The main event: Fish and Chips.

I gave the server a good look in the eye before ordering, asking him whether the Fish and Chips was really worth the hype. His response? A chuckle, a nod, and the name of the boat they’d bought the haddock from that morning. Oh. Why, yes, that will do, thanks.

We obviously had to start with deconstructed bruschetta, because you never pass up an opportunity like that. Drool on!

See how cute? Quotes, mismatched chairs, and a wall of windows.

3 responses to “Good Fish and Chips?”

what I’m writing about

all work on this page is original and authored solely by elockwood, unless otherwise noted. all images are owned by elockwood, and are not for use elsewhere without prior permission. please credit this site if you are reproducing work and offer a link back to the original piece.

Want More? These posts are the most popular: